Mountain biking in Placitas has become a contentious issue. LPA was contacted a few months ago and the issue has since been in the local and Albuquerque papers. Many local residents feel that the trail building is illegal and has destroyed a beautiful peaceful place to hike and enjoy the beauty of nature. The Placitas Area Trails Association claims mountain bikers have been threatened. LPA has looked into the issue and here is what we learned.

There is no prohibition to any mountain bike use of the area outside of the wilderness.  As the population of the greater Albuquerque area increased, use of this area increased to the point where it was becoming a free for all.  This trails project was as an attempt to have a thoughtful trail system in the area that can be used by a multitude of people, reduce resource impacts, and keep the mountain bikers outside of the wilderness boundary.  Some of these user created trails were in the wilderness so trail reroutes were established to give people loop trails that would not cause them to ride illegally.  The reroutes are supposedly outside of the Research Natural Area (RNA) although we are not in a position to verify that.

As the nation’s population continues to increase, more and more areas that were once out of the way are being “discovered” by urban populations. We believe what the Forest Service has tried in the Placitas area is to bring some trail management into the chaos – an attempt to make the increased use enjoyable to a variety of people who use the area. Given a shrinking FS budget that must devote more and more to fighting wildfires, monitoring what is actually going on must be a challenge. 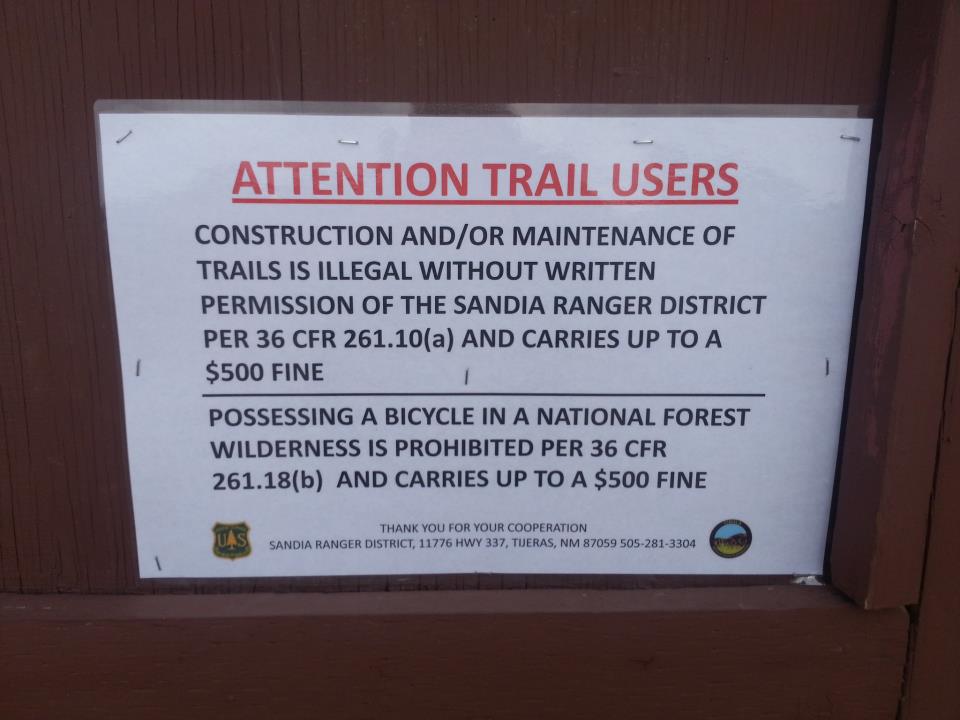 Get our emails about alerts and events

You are not only helping us with the important projects we take on each year, you will get something special too:
Harmony with land is like harmony with a friend; you cannot cherish his right hand and chop off his left. That is to say, you cannot love game and hate predators… The land is one organism.
Aldo Leopold